Competitive sailing is so white even the overwhelmingly white participants can’t help but notice how white it is. “I feel like it’s a pretty well-known fact, a stereotype that holds true,’’ observed Cori Radtke, the assistant sailing coach at Maine’s Bowdoin College.

It’s so white that many of those same white competitors have committed to an initiative to study, understand and change the demographics of the sports at the college level. Even with its tiny numbers of Black and other non-white participants, they still far exceed those at the national level and in Olympic and other competitive circles.

Preston Anderson created The Inclusion, Diversity and Equity Task Force (TIDE) in college sailing. TIDE owes its existence, motivation, and driving force to one of the few Black collegiate sailors, who has lived with being a rarity in his sport since he first took it up as an 8-year-old growing up in the suburbs of Chicago. For Anderson, a senior at Bowdoin, creating TIDE in the summer of 2020 grew from being questioned about whether he belonged in the sport he loved by the predominantly white sailing world and by the Black community that implied loving sailing meant he was less Black.

“Yes, there are two parts to this,’’ Anderson said with a chuckle. “Friends and acquaintances of mine who really didn’t understand it, [asking] why are you doing this, trying to challenge my identity. Then you had others who you know in sailing; they were going off all of the stereotypes, seeing and hearing things about why you were there, when you were the only one there.”

Anderson’s sparking the movement to broaden collegiate sailing two summers ago was no coincidence – it was created in the wake of the police murder of George Floyd in Minneapolis and the social and racial reckoning movement that followed. Anderson first spoke to his Bowdoin coaches, Radtke and head coach Frank Pizzo, about the imbalance evident to them and others in the sport. Then Anderson began reaching out to athletes at other schools in their conference, the New England Intercollegiate Sailing Association, one of the seven U.S. conferences that make up the Inter-Collegiate Sailing Association (ICSA).

His emphasis from the beginning was to keep the organization student-run, and his outreach grew to the sailors in every conference, college organizations in Canada and the United Kingdom, and the national office and ICSA president Mitch Brindley, the head coach at Old Dominion. Radtke and Pizzo contacted coaches and administrators at Bowdoin and other schools. All were eager to be part of the solution and were well-versed in the problem, having witnessed it throughout their years in sailing as youths and in college.

“As you move through the competitive levels, it becomes much more white and privileged and homogenous,’’ said Radtke, who split her time growing up on Cape Cod in Massachusetts and coastal southeastern Virginia and attended Old Dominion. She rarely saw Black, Asian, Latino, or any other non-white competitors as a student or as a coach since her arrival at Bowdoin in 2015. “I have worked with other [non-white] athletes, but it’s still highly privileged. It doesn’t necessarily feel diverse.’’

There was also the environment that would greet Black people in the sport – an issue Bowdoin grappled with publicly the year Radtke arrived in 2015 and years before Anderson enrolled. That fall, the sailing team put on what they termed a “gangster party,’’ with stereotypical outfits and accessories, including cornrows, baggy clothes and thick gold chains. The campus African American Society alerted school officials. Administrators and students threw themselves into education, sensitivity, and inclusion.

The sailing program itself and its coaches – Pizzo and Radtke found out about the party after the fact – immersed themselves in learning about diversity and embracing and understanding different cultures, a process that also occurred when Anderson arrived as a freshman. “It made me reflect a little, especially after what I had gone through coming up in the sport as the only one in the sport. Is this really a sport I want to be a part of?” 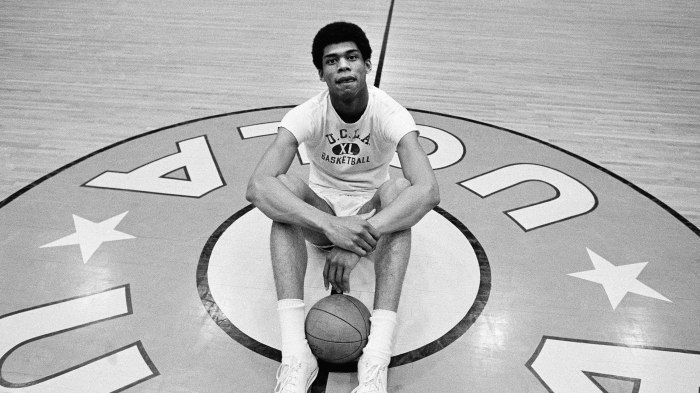 The reign of Lew Alcindor in the age of revoltRead now

Seeing team members maintain a conversation about rectifying it – every ensuing team talked to the incoming class about the lessons they learned the hard way – not only encouraged him to continue, he said, but in opening doors to others in college sailing.

“I want to stay in this,’’ he recalled, referring to his decision. “I want to make change.’’

The opportunity to start making significant changes came with the social reckoning and the formation of TIDE. Anderson asked Radtke to chair the task force (Anderson is the vice chair). Brindley lent the full support of the ICSA, knowing from his decades of sailing competition, coaching, and administration that the face of the sport had too little variation. Brindley and others connected to Old Dominion crossed paths with Black collegiate sailors more often than most partly because the Norfolk-Tidewater area has a sizable Black community tied to the Navy base and shipyards. And partly because the only historically Black university with a varsity sailing program is nearby Hampton, which has produced nationally competitive athletes, Black and white, since the early 2000s. Hampton and Old Dominion host joint competitions, share facilities and equipment, and regularly help the local water sports education programs.

“Here’s a sport where we need to expand,’’ Brindley said. “Why on earth would we want to limit based on gender or race or other ethnicities? We’ve got to be welcoming to everybody, in all the ways we can be successful in our sport.’’

Pizzo added, “I think I’ve been aware of it for a long time, but I think it’s kind of happening in a lot of aspects of American society. You’re kind of aware of it, but as soon as you start peeling the onion back, you say, ‘Oh, wow, this is systemic.’ ” Pizzo began sailing during his middle school days in Connecticut, competed at Bowdoin, and became head coach in 2006.

An essential element of how systemic it was, though, was getting exact figures. TIDE commissioned a study in October 2020, sending out questionnaires to athletes, colleges, and coaches across the country. Questions addressed race, ethnicity and nationality, and gender and identity and covered participation and cultures in competition and coaching. Nearly 1,100 athletes and 63 coaches responded, and in the resulting Culture & Demographics Survey released in December 2021, the perceptions and stereotypes everybody throughout the sport assumed were proven accurate.

86.3% of respondents were white or Caucasian (with 95.3% of them identifying as non-Hispanic or Latino). Asians made up just over 6%, Latinos less than 5%, and Black respondents 0.8%. About 4.3% identified as being of more than one race. White people made up nearly 96% of the coaches who responded overall.

It said that most of the respondents learned how to sail and race before age 14 and that white sailors learned at or before that age more often than people of color, who were more likely to learn after joining the college team. Much of the participation depended on financial resources; the ICSA does not provide athletic scholarships for sailing. Participants largely don’t have socioeconomic impediments to competing between being wealthy enough to attend and receiving academic scholarships or other assistance. That reinforces the idea that people who want to sail are priced out before college.

That is an important goal of TIDE: to make the sport affordable to those traditionally left out and open avenues historically closed to them. Across the board, TIDE members, whether students, coaches, or officials, work with community, civic and educational organizations to not only get potential sailors into the water but to get them comfortable in and around water when they ordinarily have not been.

Anderson graduates next spring, and he wants to lay a foundation that not only keeps the current college environment diverse and inclusive but opens a pipeline to the next generation that feels blocked or doesn’t see sailing as an option at all. “How can we build a strong relationship with youth sailing, getting more people into the water?” he asked.

“We can’t just select our elite athletes based on their parents’ checking account,’’ Brindley said. “Otherwise, we’re limiting ourselves … We need to expand beyond that and are in an environment where we can support those who are talented athletes and who have the drive and initiative and mindset to compete, and then give them a path to afford that elite-level competition, be in that Olympic pipeline and international championship pipeline. Beyond college sailing, we have to make sure people can afford to play.’’ 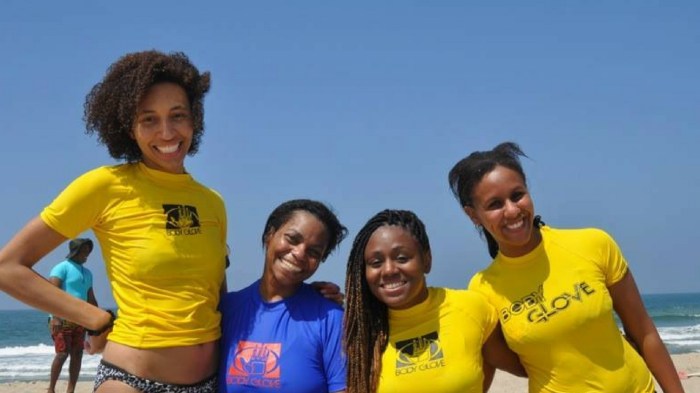 People, for example, such as Leo Boucher, arguably the most accomplished sailor of color in the collegiate ranks. Boucher, who is biracial, is a junior at St. Mary’s College in Southern Maryland. In early November 2021, he won his second career ICSA singlehanded national championship in Annapolis, near where he grew up and learned to sail. Boucher is on the fast track to making the U.S. team for the 2024 Summer Olympics in Paris and made it this far thanks largely to his father, Ken, a longtime public high-school music teacher in suburban Prince George’s County. Ken Boucher stretched every dollar they had and he and Leo took summer jobs to pay for the boats and equipment.

As prominent as Leo Boucher is at this level, his father pointed out that access to the sport, education, and a different world is the reward to the non-white youths currently on the outside looking in. “That’s why we have to bring it down into diverse communities where winning is sometimes hard to put your hands on,’’ Ken Boucher said. “Like they say, billionaire or bricklayer, we’re all in the same boat. We have to get them to the place where they’re all in the same place.’’

TIDE, he added, is a great starting point, but it is up against “systemic racism that none of these current folk created; it has all been inherited.’’ That national competition in Maryland was a perfect example. The elder Boucher, who is white, said – of the 36 competitors in the coed and women’s classes (as is sometimes the case, “coed” races end up being all-male), “there are 2½ who weren’t white,” jokingly referring to his son.

That ingrained system means that Boucher, Anderson, and the handful of other Black sailors and people of color in the sport and the Hampton program carry a unique burden. It’s one that TIDE and its supporters recognize. “As athletes of color, we don’t want to put the pressure on them to teach us everything,’’ Radtke said. “But having [Anderson] on the team has helped us learn and grow as an organization, and we’ve learned a lot within our own team, and we’ve been fortunate that he is also happy to bring that to the greater college sailing world.’’

Anderson is glad to do it. He’s equally pleased to get the overwhelming demographic of the sport involved.

“We’re such a close-knit community,’’ he said of the college sailing world. “Now it’s about getting everybody else into the sport. How do you get into youth sailing if you don’t see anybody who looks like you? Why would you get into it? We’re all committed to doing something about it.’’