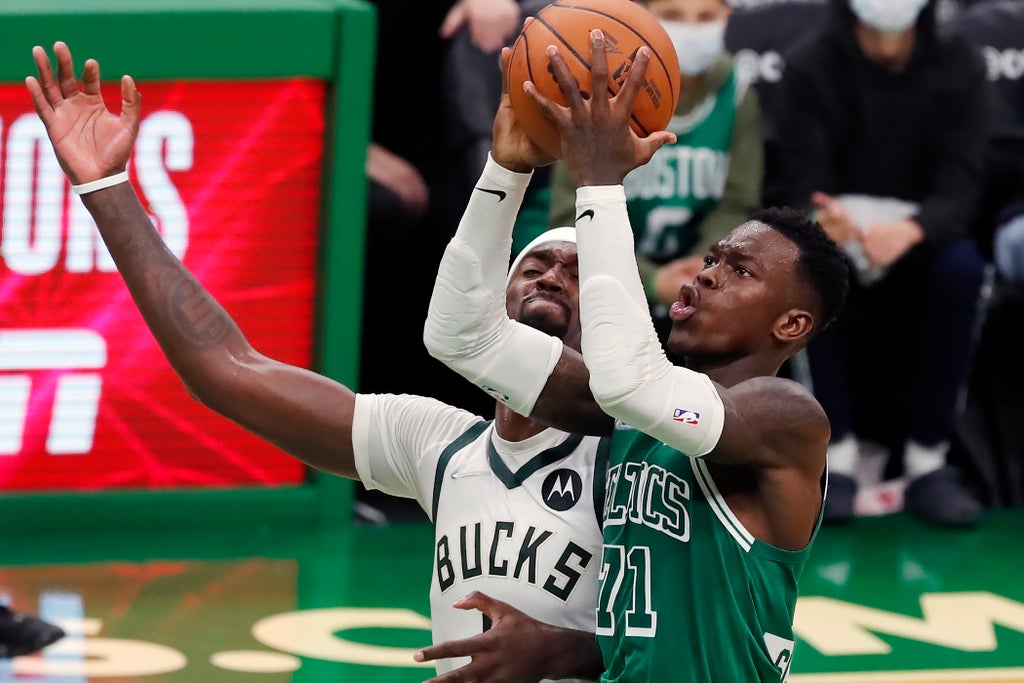 The Boston Celtics took advantage of the absence of Milwaukee Bucks star Giannis Antetokounmpo by posting a 122-113 overtime win in the NBA on Friday night.

With reigning finals MVP Antetokounmpo ruled out 90 minutes before the match with an ankle sprain, the Celtics led narrowly at three-quarter time before a Bucks’ fightback sent the match into overtime, where Boston went on a 14-5 run to seal the home victory.

Dennis Schroder scored a season-high 38 points – including eight in overtime – while Jayson Tatum had 27 points and 11 rebounds for the Celtics, who have won four of their last five games.

Jrue Holiday had 17 points and 13 assists for Milwaukee, while Bobby Portis had 22 points for the reigning champions.

Stephen Curry scored nine three-pointers and finished with 40 points to lead the Golden State Warriors to a 119-93 win over the visiting Chicago Bulls.

Zach LaVine led the Bulls with 23 points while DeMar DeRozan had 18.

James Harden turned in a superb individual effort to lead the Brooklyn Nets to a 120-112 win at the New Orleans Pelicans.

Harden ended with 39 points, 12 assists and five rebounds, and dropped a 27-foot three-pointer with 29 seconds left to secure the result.

He was supported by Kevin Durant with 28 points while Joe Harris had 24 for the Nets, who have won seven of their past eight.

Jonas Valanciunas had 20 points and 12 rebounds for the Pelicans.

In other games, the Charlotte Hornets won 104-96 at home to the New York Knicks, the Cleveland Cavaliers secured a 98-78 victory against the visiting Detroit Pistons and the Portland Trail Blazers defeated the Houston Rockets 104-92.

The Oklahoma Thunder beat the visiting Sacramento Kings 105-103, the Phoenix Suns won 119-94 at the Memphis Grizzlies, while the Dallas Mavericks triumphed 123-109 away against the San Antonio Spurs.

Elsewhere, the Denver Nuggets won 105-96 at home to the Atlanta Hawks and the Minnesota Timberwolves crushed the Los Angeles Lakers 107-83 on their home court.