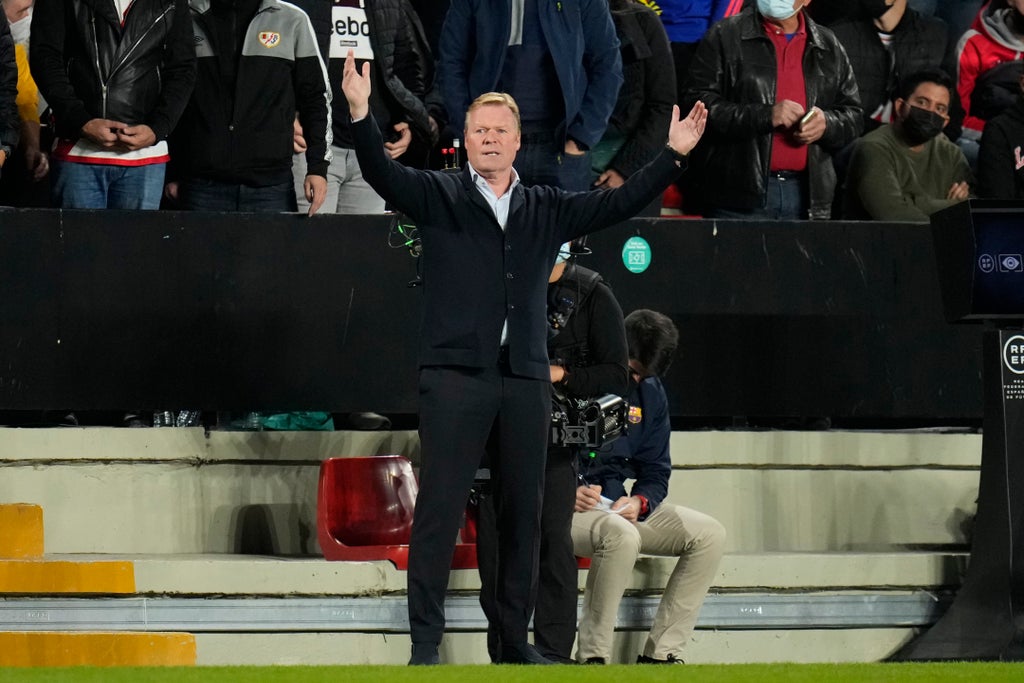 The 58-year-old was already under pressure after his side lost to Real Madrid at the weekend and this latest reverse – their fourth in their last six matches – proved the final straw for the board.

“FC Barcelona has relieved Ronald Koeman of his duties as first-team coach,” an official club statement read following a fifth loss in all competitions this term.

“The president of the club, Joan Laporta informed him of the decision after the defeat against Rayo Vallecano. Ronald Koeman will say goodbye to the squad on Thursday at the Ciutat Esportiva.

“FC Barcelona wishes to thank him for his service to the club and wishes him all the best in his professional career.”

Koeman enjoyed a huge amount of success as a player at the Nou Camp, winning four LaLiga titles and the European Cup during a trophy-laden spell at the beginning of the 1990s.

The lure of returning to his old club proved too strong back in August 2020 with the Dutchman leaving his post as Holland boss to complete a shock return.

An up-and-down first campaign saw Barca win the Copa del Rey but ended in disappointing fashion as they finished third in LaLiga having also lost heavily to Paris St Germain in the Champions League last-16 stage.

With the club’s financial situation causing problems, Koeman could only watch on as Lionel Messi departed after he was unable to sign a new deal due to the ongoing issues off the pitch.

A poor start to their Champions League campaign where they suffered defeats to Bayern Munich and Benfica increased the scrutiny on the ex-Everton boss, who then saw their LaLiga form drop off.

Three defeats in four league games with the last a 1-0 loss at Rayo Vallecano saw Koeman’s time end with only one year left on his terms.

Memphis Depay missed a penalty in Wednesday’s reverse on the road which went the way of the home side thanks to a Radamel Falcao goal.

Barca are next in action on Saturday at home to Alaves with ex-midfielder Xavi among those heavily linked to the vacant position.

The former Spain international is currently in charge of Al-Sadd, who are unbeaten in 34 consecutive league games.