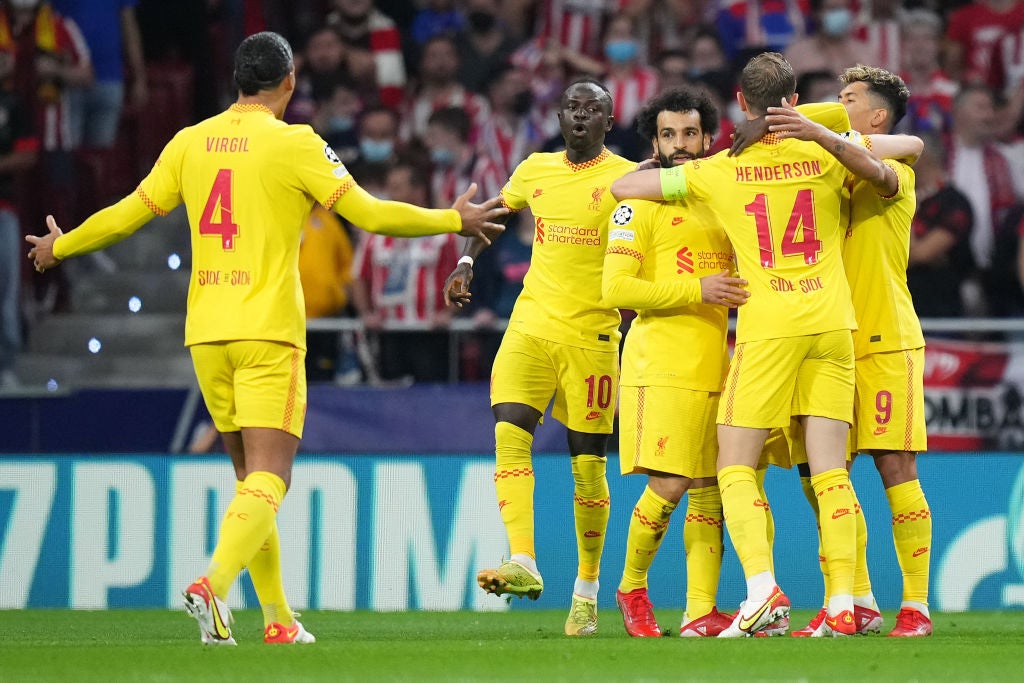 The Reds started in sublime fashion and were two goals up before the quarter-hour mark, with Mohamed Salah’s patented dribble and shot routine finding the bottom corner via a deflection, before Naby Keita thundered in a brilliant volley from 20 yards.

Atletico responded well though, Koke’s shot side-footed in by Antoine Griezmann before the French forward burst into the box and buried a second strike after little more than 30 minutes. Griezmann’s night ended early, though, as he was sent-off less than 10 minutes after half time for a dangerously high boot which caught Roberto Firmino in the face.

There were fewer clear chances at either end after the red card until Mario Hermoso decided to barge Diogo Jota to ground, allowing Salah to net a penalty, before Jota did the same to Josema Gimenez at the other end – only for the referee to overturn his own initial spot-kick decision after looking at the pitchside monitor.

Here are the player ratings from the Wanda Metropolitano Stadium on Tuesday night.

Jan Oblak – 6. No chance with either goal and was somewhat less-assured than he usually is. Palmed a Mane header away which almost gifted Salah the rebound and his kicking out was poor a times.

Felipe – 6. Dreadful clearance for Keita’s strike and really struggled to clear his lines in the early minutes of the game. Improved afterwards as the Reds lost attacking coherence.

Geoffrey Kondogbia – 5. Played out of position at centre-back and struggled positionally. Subbed at the break.

Mario Hermoso – 3. “Composure” appeared not to be in his vocabulary for the night, neither in possession nor in the challenge. Woeful decision to bring down Jota for the penalty.

Kieran Trippier – 7. Probably just about edged an ongoing battle against Sadio Mane. Certainly won a few decisions off the referee which were of a dubious nature at best, but was also one of the most regular outlets for his team all game.

Koke – 7. The driving force to get his team back into the match after falling two down.

Rodrigo de Paul – 7. Great on the ball with one-touch passing, really clever link play around the edge of the box and running beyond the forwards. Less-stellar with his defensive work at times.

Thomas Lemar – 7. Flitted between the channel and the flank with some very intelligent movement and passing, some creative dribbling and plenty of tracking back against Alexander-Arnold and Salah.

Yannick Carrasco – 7. Loads of energy, not quite the end product required though from the left.

Antoine Griezmann – 8. Two very different, but very good, goals in the first half – and huge involvement in other two chances in a vibrant display. Straight after the break, though, he was shown a straight red card for a very high, very dangerous boot in the face.

Joao Felix – 8. Some very special moments of control and pace to get away from the defence. Involved in the second goal and denied a strike of his own by Alisson.

Alisson – 8. Made a couple of vital saves from Griezmann and Felix, but could do nothing about either goal from the Frenchman. Great saves and distribution, though got lucky once with a pass against a team-mate which bounced striaght back to him.

Trent Alexander-Arnold – 6. Started very well with his build-up play and crossing from the right, but later struggled defensively and lost his composure in possession.

Joel Matip – 6. Like most of the defence, far from his best night. Bad calls on holding the offside line once or twice.

Virgil van Dijk – 5. Totally turned around for Griezmann’s second and lost the Frenchman several times on runs from deep.

Andy Robertson – 5. A below-par outing for the left-back. Didn’t really get his crossing radar going and was beaten for pace and timing of the run by Griezmann more than once.

Jordan Henderson – 5. A mixed outing at best for the captain. He was unable to really close out spaces when the deepest of the trio in midfield, and his passing wasn’t overly impressive when further forward.

Naby Keita – 5. Magnificent volley for the Reds’ second, but beaten far too easily for Atletico’s two goals, dribbled past on either occasion. Subbed at half-time.

James Milner – 6. Hard-running and some decent link-up play at times, but tired as the game went on and was unsurprisingly subbed after being booked.

Mohamed Salah – 7. Typical involvement for the opening goal as he beat three players and fired in his deflected effort. Often busy as an outlet and looked to take on the defence when he could, but no further big chances fell his way – until he was gifted a penalty, which he duly scored.

Roberto Firmino – 6. A quiet outing for Firmino other than some good defensive work and the fact he got kicked in the head by Griezmann.

Sadio Mane – 5. Not his night. An out-ball at times but couldn’t get the better of Trippier with regularity and never looked like being a route to goal.