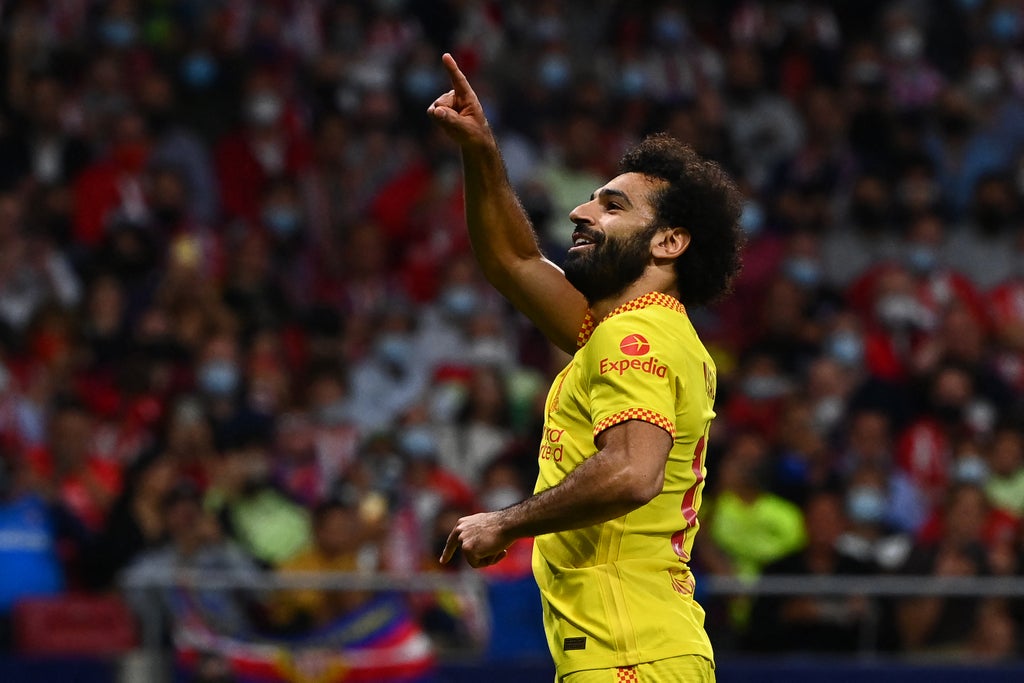 Liverpool secured an impressive win away to 10-man Atletico Madrid in a five-goal thriller in the Champions League to continue their 100 per cent start in Group B.

The Reds made a dream start and went two goals up inside 13 minutes thanks to Mohamed Salah’s deflected strike and Naby Keita’s volley from outside of the box.

But Antoine Griezmann pulled one back from close range following a corner and then scored his second when he beat Virgil van Dijk to the ball and finished past Alisson, as Atletico went into the break level at the end of a thrilling first half.

The contest turned once more shortly after the restart when Griezmann was shown a straight red card for an accidental high foot on Roberto Firmino, and Liverpool were then awarded a penalty after Mario Hermoso’s foul on Diogo Jota. Salah converted the spot kick in the 78th minute to restore Liverpool’s lead but there was further drama when Atletico were awarded a penalty at the other end, only for it to be overturned by referee following a review of the pitch-side monitor.

Liverpool secure big win despite being far from perfect

While Jurgen Klopp would have snatched your hand off for an away win at Atletico Madrid, he would have been frustrated by some elements of his side’s performance. Liverpool’s display, like the match as a whole, had everything, some good, some bad, and a little bit of ugly.

The Reds were impressive from the off, carrying the confidence from their good start to the season and 5-0 win over Watford at the weekend and dominating the opening exchanges at the Wanda Metropolitano. The Premier League side had plenty of possession but they ensured their passing remained sharp and did not allow themselves to be drawn into Atletico’s trap as Simeone’s side sat deep. The two goals which followed reflected their superiority and although it is a rarity for a side to enjoy such a start away to Atletico, it was a deserved lead as well as a shocking one for the home fans.

The following 20 minutes, however, saw Liverpool lose control in midfield and Atletico thrive on the spaces which opened up. Virgil van Dijk and Joel Matip were exposed and it took several big saves from Alisson to bail them out, and even then they found themselves heading into the break level.

By that point, Liverpool had lost their momentum in attack and they even struggled to rediscover it when up against 10 men following Griezmann’s red card. The second half was more reminiscent of Liverpool’s previous visit to Atletico two seasons ago, in which they were frustrated in a 1-0 first-leg defeat, but they were rescued by Salah’s late penalty – awarded after a baffling challenge from Hermoso on Jota.

And it wasn’t finished there, as Jota then went close to conceding a penalty at the other end. Liverpool got away with it, which rather summed up their performance on a crazy evening in the Champions League.

In a remarkable first half, Atletico recovered from two goals down against Liverpool while producing the sort of football that has become expected of them given their attacking options.

It was perhaps a surprise that Luis Suarez had been left out from the start, but the performances of Griezmann and Joao Felix showed why Simeone had gone with that approach. Despite barely touching the ball in the first 15 minutes of the match, the pair came alive and gave Liverpool plenty of problems with their movement and runs in behind.

Griezmann’s goal changed the complexion of the contest but it was the way that he and Felix linked up that suddenly made Liverpool look shaky. Felix, in particular, was elusive with his dribbling and touch and was instrumental in the equaliser, which also brought a clever turn and finish from Griezmann.

It’s ironic that the flurry came after Atletico had found themselves two goals down, in a season where they have struggled for attacking cohesion and fitting their stars together under Simeone’s system.

In a further twist, Griezmann was then shown a straight red for a high foot on Firmino, and Atletico reverted to type once reduced to 10 men. But if they play like they did in the 20-minute spell at the end of the first half, they should pose Liverpool further problems in two weeks’ time.

Mohamed Salah was again the Liverpool hero and made history by scoring in a ninth match in a row, and it was notable that he still proved to be the difference despite a quiet display in Madrid.

While defending against Salah is one of the toughest assignments in football at the moment, it was a task made much harder for Atletico by the way they started the match. With Diego Simeone sticking with the 3-5-2 formation he has predominantly used in La Liga this season, the Atletico manager made the surprising decision to start Yannick Carrasco up against the in-from Salah over the more conventional full-back Renan Lodi.

When Salah was able to cut inside Carrasco and fire a deflected shot past Oblak, it looked as if the forward was going to have a field day. In the end, with two goals to his name, he did. But despite the favourable matchup against the Belgium international, Salah saw much less of the ball as Atletico hit back and Liverpool lost their momentum.

Still, Hermoso’s baffling foul on Jota presented Salah with the opportunity to re-establish Liverpool’s lead and after missing his last spot-kick against AC Milan, he stayed calm to beat Oblak for the second time.

Keita shows why he’s not a regular yet for Liverpool

Despite scoring a stunning volley to double Liverpool’s lead, his second in recent weeks following a similar strike against Crystal Palace, the gloss on Naby Keita’s display was undone by the two Atletico goals that followed.

Keita was beaten too easily by Lemar on the byline in the move for Griezmann’s first goal before he again was turned, this time by the excellent Felix, for Atletico’s first-half equaliser. He wasn’t strong enough defensively in helping Trent Alexander-Arnold and it wasn’t surprise to see his number held up when Fabinho came on at the start of the second half.

With Thiago and Curtis Jones injured and Fabinho starting on the bench following his late arrival back from international duty, Keita had an opportunity to impress against Atletico, and despite his goal, it was one he didn’t take.

Although the Reds were arguably drawn in the toughest of the eight Champions League groups, Klopp’s side have reached the halfway stage with three wins out of three.

It’s quite remarkable that they’ve done that, following two five-goal thrillers against AC Milan and Atletico in which they blew a two-goal lead in both matches, but the end result is the same and it gives Liverpool a five-point lead over Atletico and Porto in Group B.

That means Liverpool will qualify for the last 16 with two matches to spare if they beat Atletico at Anfield in two weeks’ time.