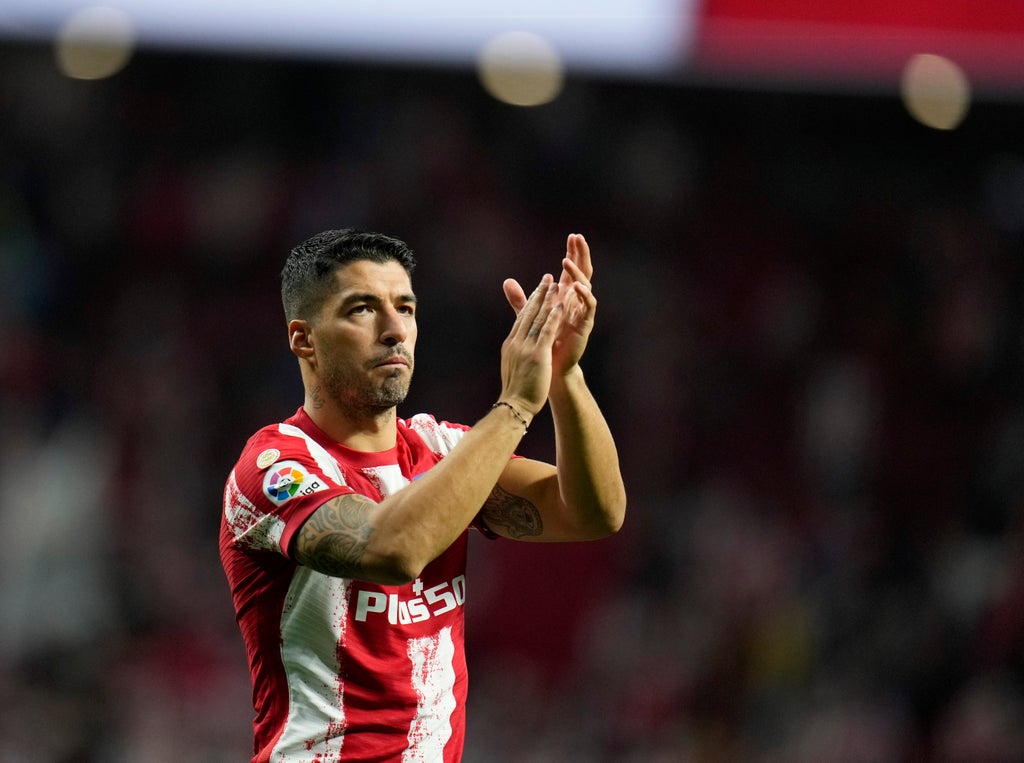 Atletico’s win saw them draw level with city rivals Real at the top of LaLiga while Barca’s season lurches deeper into crisis.

Ronald Koeman demanded a reaction from the midweek Champions League loss at Benfica but watched helplessly as Lemar fired a 23rd-minute opener past Marc-Andre ter Stegen then Suarez added the second just before the break.

Manu Sanchez grabbed the only goal of the game in stoppage time as Osasuna beat Rayo Vallecano 1-0 in the first LaLiga match played in front of a capacity crowd since the start of the pandemic.

Mallorca got back on track after two successive defeats as Angel scored the only goal of the game against Levante, for whom Jose Luis Morales had an 85th-minute penalty saved by Manolo Reina.

Valencia are now without a win in four LaLiga games after they were held to a goalless draw at Cadiz.

Inter Milan were forced to fight back from behind as they returned to winning ways in Serie A with a 2-1 triumph at Sassuolo.

Domenico Berardi’s penalty gave the home side a 22nd-minute lead but Edin Dzeko equalised on the hour mark and Lautaro Martinez, also from the penalty spot, completed Inter’s comeback 10 minutes from time.

Their win lifted Inter into second place in the table, behind leaders Napoli who were due to travel to Fiorentina on Sunday.

Manuel Locatelli scored the only goal of the game in the 86th minute as Juventus edged a tight Turin derby at Torino.

Juventus missed a number of early chances but Locatelli’s fierce strike grabbed the points for a win which leaves Massimiliano Allegri’s men seven points behind Napoli.

Milan Djuric came off the bench to earn Salernitana their first win of the season with a 1-0 success over Genoa.

In the Bundesliga, Borussia Dortmund shrugged off the continued absence of star striker Erling Haaland to beat Augsburg 2-1 and move into second place.

Julian Brandt fired a 51st-minute winner after Augsburg’s Andi Zeqiri had cancelled out Raphael Guerreiro’s early penalty for the home side.

Borussia Monchengladbach claimed their third straight win – and their first away from home this season – after fending off 10-man Wolfsburg 3-1.

Two goals in the first 10 minutes from Breel Embolo and Jonas Hofmann put the visitors in control but Luca Waldschmid narrowed the deficit and the home side pushed prior to Maxence Lacroix’s 76th-minute sending-off.

Freiburg continued their fine start to the season as goals from Philipp Lienhart and Nils Petersen gave them a 2-1 win at Hertha Berlin, who had briefly levelled through Krzysztof Piatek.

Nice claimed their second straight win in Ligue 1 with a 2-1 win over Brest, Jean-Clair Todibo and Melvin Bard scoring either side of the interval before Franck Honorat’s late consolation.

Montpellier and Strasbourg played out a 1-1 draw with Florent Mollet opening the scoring for the hosts and Kevin Gameiro equalising for the visitors.