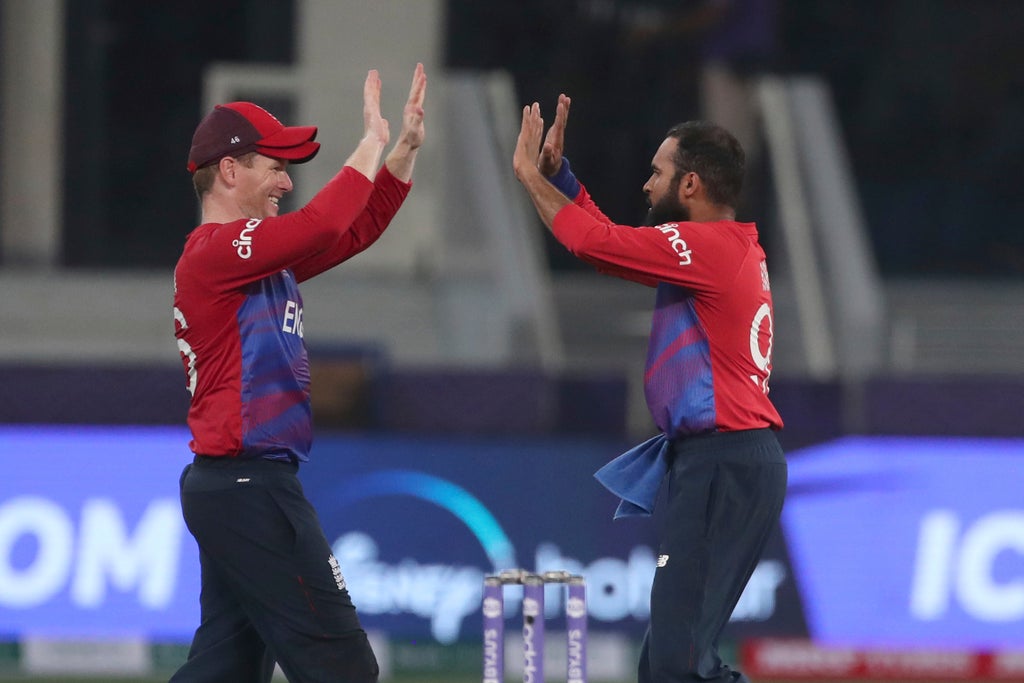 England got their T20 World Cup campaign under way in supreme fashion, rolling over the West Indies for an anaemic 55 before completing a six-wicket win that left Eoin Morgan purring: “It’s as good as it gets.”

Bidding to become the first side to hold both limited-overs World Cups simultaneously, having scooped the 50-over crown in 2019, England made a statement of intent against the defending T20 champions on a steamy evening in Dubai.

They had never before beaten the Windies in five previous attempts in this competition, most recently losing an epic 2016 final. But the Windies were left needing a miracle even bigger than the one Carlos Brathwaite conjured five years ago after dramatically collapsing to the third lowest total in the tournament’s history.

After Jos Buttler’s 24 not out from 22 balls helped England reel in the target in only 8.2 overs, Morgan said at the presentation ceremony: “I think it’s as good as it gets to start a world tournament like that.

“Full credit has to go to our bowling unit, we stuck to our guns and the guys were very disciplined. We fielded well, took our chances and built pressure and momentum to create the rest of the chances throughout the innings.”

It was a heart-warming return to international cricket after four injury-plagued years for Mills, restricted to bowling in the shorter formats because of a congenital back condition, and he was lauded by Morgan afterwards.

Morgan said: “I’m delighted for big T. He’s had an incredibly unfortunate journey throughout his career right from the start. Up until now he’s as good as I’ve seen, both fit and bowling fit.

“I’m absolutely delighted that not only he was back on the field for us but contributing in the manner that he has in the past in a Sussex shirt.”

England omitted Mark Wood because of a left ankle niggle that has required an injection, although it is hoped he will be OK for Wednesday’s next Super 12 contest against Bangladesh in Abu Dhabi, and included Dawid Malan.

However, it seemed peculiar as first Jonny Bairstow then Moeen, Liam Livingstone and Morgan were shuffled up the order ahead of Malan, renowned for starting slowly before upping the tempo as his innings progresses.

Morgan insisted it was a tactical call, adding: “We thought if we got through a couple of overs unscathed, we would try and send out guys who could go after the ball a little bit more.

“It actually proved tough to get after the ball, it didn’t work out as well as would have liked but it definitely would have benefited our (net) run-rate.”

The Windies’ paltry total, subsiding meekly after a rash of injudicious strokeplay, was the worst by a Test-playing nation in this tournament, with only 42-year-old Chris Gayle reaching double figures as he made a run-a-ball 13.

Captain Kieron Pollard was among those to fall to a catch in the deep, but the rot had set in long before he was the eighth person out. He admitted afterwards their efforts were deeply unsatisfactory but insisted they will rebound.

He said: “There’s no words to explain it. It was plain to see. I don’t think we were good enough on all counts. Being bundled out for 55 is unacceptable. We accept that, we accept the responsibility.

“These sorts of games – we just have to bin it and move on. It’s not something that we’re proud of as a team.

“I don’t think any sort of panic will come into the camp. It’s not something we’re big on, panicking in these situations. We just need to accept it. We have to take it on our chests as big men and move on.”