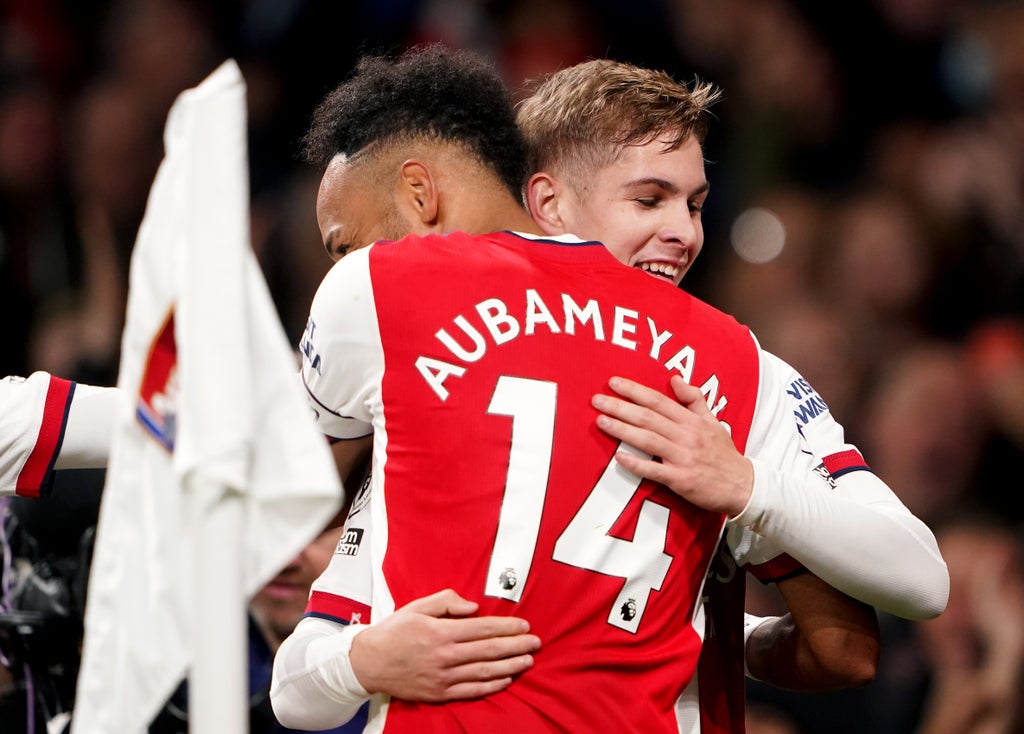 Arsenal put in one of their best performances of the season to outclass Aston Villa at the Emirates Stadium on Friday night.

The Gunners were the better side throughout and thoroughly deserved their 3-1 victory, which sees them draw level on points with sixth-placed Manchester United having played a game more.

Thomas Partey got the ball rolling with his first Arsenal goal before Pierre-Emerick Aubameyang doubled the lead on the stroke of half-time after seeing his penalty saved.

Emile Smith Rowe capped a fine display against his summer suitors by adding the third, with substitute Jacob Ramsey pulling one back for a disjointed Villa.

Mikel Arteta’s side had started well on Monday night but were eventually pegged back by Crystal Palace and needed an injury-time equaliser from Alexandre Lacazette to salvage a point.

He was rewarded with a recall here as one of three changes and this time Arsenal did not let the early intensity slip.

Bukayo Saka was fit to start despite being forced off at half-time against the Eagles and he was involved with Arsenal’s first chance.

He collected a pass from Partey and crossed deep for Aubameyang, whose speculative effort fell back to the England winger but he blazed his strike high and wide.

Arsenal were out of the traps with the same frenetic pace as they showed against Palace, Partey hitting the crossbar and Nuno Tavares seeing a shot deflected behind.

Moments later Partey would open the scoring with his first goal for the club, turning in a header off his shoulder from the resulting set-piece as former Arsenal goalkeeper Emiliano Martinez failed to keep out the simple effort.

The Argentina stopper went some way to making amends by keeping out Saka’s close-range strike, although the shot was poor.

Villa were struggling to get a foothold in the game and left Partey unmarked inside the box to head over in the last minute of the half.

There was drama as referee Craig Pawson blew his whistle just before half-time, checking his pitchside VAR monitor for a possible penalty.

Lacazette had gone down after a challenge from Matt Targett and Pawson pointed to the spot, Aubameyang seeing his penalty saved by Martinez before turning home the rebound.

Villa were better at the start of the second half but were three down before the hour as their defence was caught upfield allowing a through-ball from Aubameyang to play Smith Rowe in behind.

The England Under-21 international was subject of a bid from Villa in the summer but Arteta said on the eve of the game he was never worried Smith Rowe would leave and he added the third off the post via a Tyrone Mings deflection.

Dean Smith’s side were at least getting around the Arsenal goal and Emiliano Buendia drew a smart save from Aaron Ramsdale.

Villa would hit a fine consolation as substitute Ramsey curled in a stunning strike from the edge of the box but it was the only moment of any real quality from a side who have now lost their last three league games.