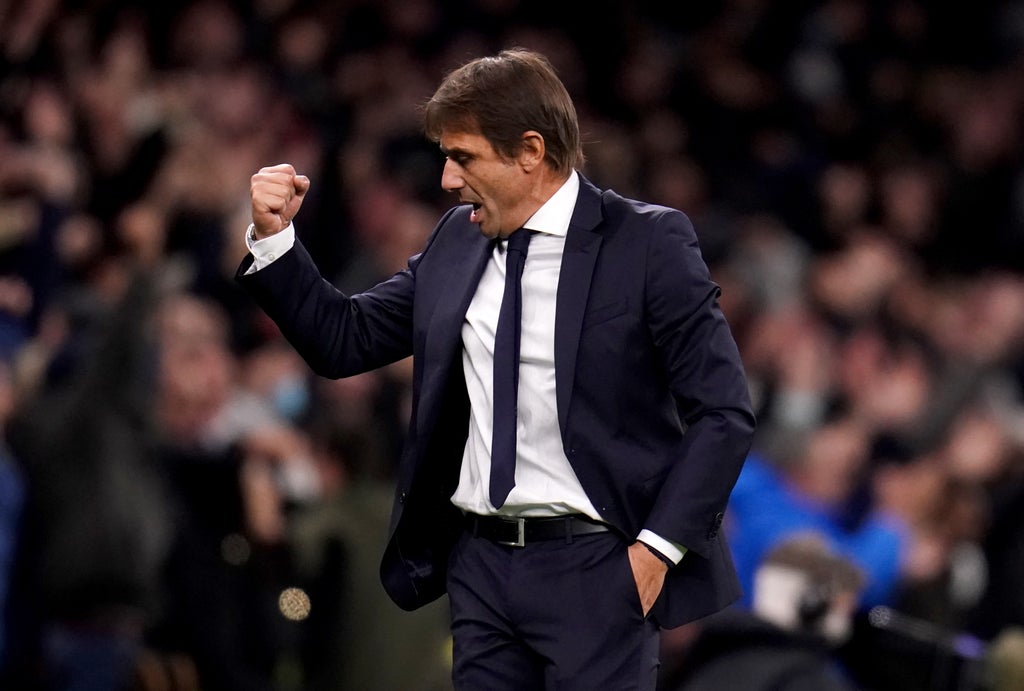 Antonio Conte got a glimpse of what life at Tottenham is like with a dramatic 3-2 win over Vitesse Arnhem in the Europa Conference League.

Conte was taking charge of his first game since being appointed as Spurs’ new boss following Nuno Espirito Santo’s dismissal on Monday.

The Italian, a Premier League winner at Chelsea, has been tasked with taking the club back to the top table of English football but was given a clear indication of what a difficult journey that might be as Tottenham struggled against the Dutch side.

Conte witnessed a perfect start as, having failed to have a shot on target in over two hours of Premier League football, Spurs found themselves 3-0 up in less than half-an-hour.

Son Heung-min who scored the first goal of both Jose Mourinho’s and Nuno’s reigns, did the same for Conte in the 14th minute before Lucas Moura and a Jacob Rasmussen own goal seemingly had the hosts in total control.

But life is just not that simple in north London right now and Rasmussen scored at the other end before Matus Bero further reduced the arrears.

Cristian Romero’s red card on the hour put Spurs further on the back foot and it was only when Danilho Doekhi and Markus Schubert were sent off for Vitesse in the final 10 minutes that they were able to get control of the game.

Conte will have been left in no doubt over the size of job he has on his hands and must now prepare for a Premier League trip to Everton on Sunday.

After only getting confirmation he could be in the dugout on Thursday afternoon after his work permit came through, Conte almost saw his new side go ahead inside the opening 90 seconds.

Romero picked out Son with an incisive pass and the South Korean looked primed to score as he rounded a defender, but goalkeeper Markus Schubert blocked the ball with his feet and Riechedly Bazoer cleared off the line.

Spurs did not have long to wait to stamp their authority on the game, though, as they went ahead in the 14th minute.

Pierre-Emile Hojbjerg played in Moura, whose shot was saved by Schubert, but the loose ball fell to Son and he found the bottom corner.

It was 2-0 in the 22nd minute as Moura played a one-two with Harry Kane, whose return pass sent the Brazilian through on goal and he made no mistake.

Six minutes later the third goal arrived as Rasmussen put through his own net when trying to intercept a Kane shot.

But the Vitesse defender did at least get quick redemption, powering in a header from a corner four minutes later to make it 3-1.

While Tottenham looked electric going forward, there were holes at the back and the visitors got a second seven minutes later as Bero rolled the ball into the far corner after Moura had given possession away.

The second half was chaotic as Vitesse pressed for a leveller, with Hugo Lloris making a flying save to deny Lois Openda.

Romero saw red on the hour mark for a second yellow card after hauling down Openda and for 20 minutes Spurs were on the rack.

Another Lloris save from Bazoer kept the lead intact and it was only when Doekhi was dismissed in the 80th minute that the pressure relented.

Goalkeeper Schubert then saw red for a handball outside the area, blocking a Royal Emerson shot, as Conte’s reign got off to an eventful, but victorious, start.