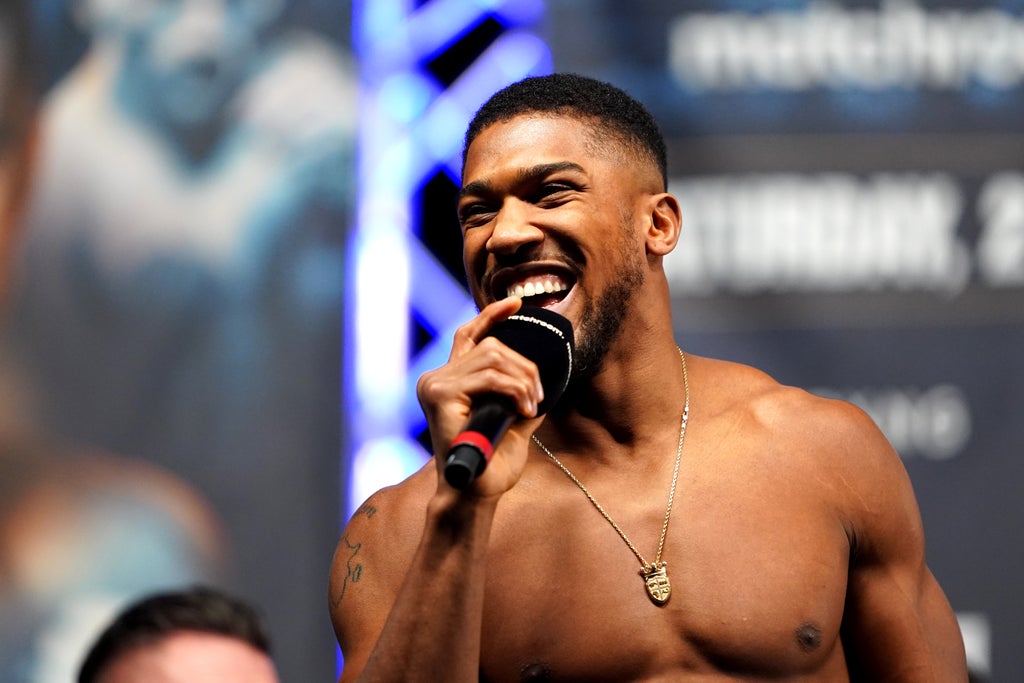 Anthony Joshua has vowed to “deliver” at Tottenham Hotspur Stadium on Saturday night after weighing in more than a stone heavier than Oleksandr Usyk on the eve of their world heavyweight title showdown.

There was an unusual amount of focus on the scales on Friday afternoon as, while there is no weight cap in boxing’s blue riband division, speculation has raged in recent weeks that Joshua has appeared leaner than usual.

But those verdicts proved unfounded as the WBA, IBF and WBO champion officially came in at 17st 1lb, only three-quarters of a pound lighter than his previous title defence against Kubrat Pulev last December.

As was the case 24 hours earlier at a cordial press conference, the two combatants had an intense stare down before polite smiles broke out with Joshua offering a fist bump before Usyk shook hands with his rival instead.

Each fighter then turned to face the media and crowd, taking turns to flex their muscles, Joshua pointing to Usyk, who then reciprocated in an incident-free occasion, the mutual respect between the pair clear to see.

As well as a sizeable weight advantage, Joshua will have the edge in height and reach and is favourite with bookmakers, but Usyk’s movement and overall technical skillset from an awkward southpaw stance have led many seasoned observers to conclude this will be a close contest.

Joshua said on Sky Sports afterwards: “Maybe if I’m fighting a shorter, stronger guy I might bulk up a bit, but I’ve got a good fighter with his legs, so I’m going to keep up with his footwork and hand speed and make sure I’m good right through for the duration.”

The Briton, making the second defence of the titles he regained in avenging the only loss in his professional career to Andy Ruiz Jr in December 2019, insisted the unbeaten Usyk is at a “good heavyweight weight”.

Usyk won Olympic gold the day before Joshua in the division below at London 2012 en route to compiling an astonishing amateur record of 335 wins and 15 defeats before switching to the paid ranks, where he claimed all four major world titles at cruiserweight within his first 15 bouts.

He has had just two fights at heavyweight – relatively unheralded American Chazz Witherspoon retired on his stool after seven rounds in October 2019 while Chisora was beaten on points 12 months later – but Joshua rubbished any suggestion there is a fear factor for Usyk (18-0, 13KOs) this weekend.

“No, no, no,” Joshua added of his WBO mandatory challenger. “How many amateur fights has he had? About 400? He’s got no fear, he’s done it loads of times.

“This is business. There’s respect there and I like that sometimes. Sometimes you’ve got to give a bit of needle. Sometimes you just don’t like people and you don’t even know them, that’s how it is with certain fighters.

“But with him, I don’t know how he feels about me. He might think I’m a complete idiot, but I’ve got respect for him.”

Lawrence Okolie is making the first defence of his WBO cruiserweight title against Dilan Prasovic, the bout serving as the chief support in north London, where more than 60,000 are expected to descend for the event.

Okolie, who has won all 16 of his professional fights, came in at 199lbs – with mandatory challenger Prasovic on the cruiserweight limit of 200lbs – and the Londoner is convinced there is even more to come from him.

He told the PA news agency: “There’s certain stuff I do in the gym that if I could bring to a fight, I’m one of the best fighters in the world. It’s just about having the confidence to actually do that, that’s all.

“It’s up to me to focus on the job on Saturday. I have long-term goals and it takes me dealing with short-term goals to do it. My short-term goal is to knock out this guy this weekend and we’ll go from there.”