Conversation around the 2022 Europa League final has been dominated by events outwith Rangers‘ control. After days of angst over matters off the pitch, it’s time for Giovanni van Bronckhorst and his players to focus on making some history on it.

The temperature gauge in Seville, the pizza oven of Spain, read 38 degrees on Tuesday. The heat won’t dip much before kick-off in the Ramon Sanchez-Pizjuan Stadium on Wednesday night, and sunshine and alcohol can make for a combustible mix when you throw 100,000 supporters — most of them ticketless — into the equation.

To that end, Rangers security staff have spent the week working flat out with the authorities to keep a lid on a potent cocktail and it hardly needs a PhD in the history of football to know why. 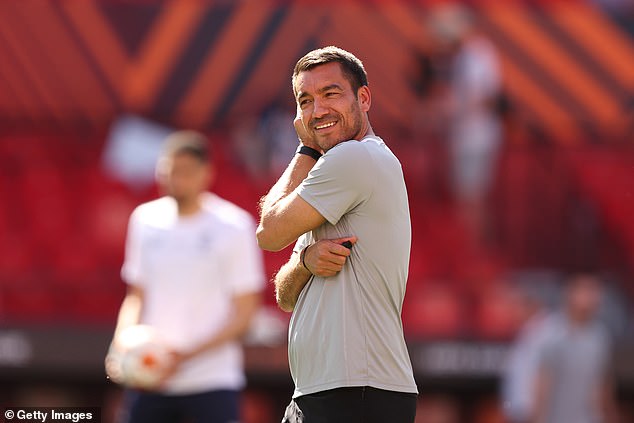 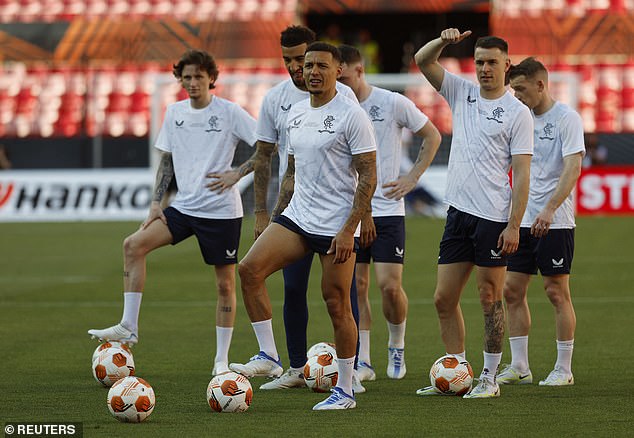 When Rangers won the European Cup Winners’ Cup final in 1972, the trophy was presented to John Greig in a windowless room of the Nou Camp as fans scrapped with police on the pitch. The UEFA Cup final of 2008, meanwhile, ended in disgraceful scenes on the streets of Manchester.

To avert bad things coming in threes, the Ibrox club have wheeled out club icons Graeme Souness, Richard Gough, Ally McCoist and Greig to appeal for calm and reason.

Communications director David Graham also addressed the issue when he alluded to the lengths to which Rangers have gone to avoid any more regrettable scenes.

‘We’re grateful for the engagement with the Spanish police, with the police back in the UK, as well as the government in the UK,’ he said. ‘We’re confident we have done a significant amount of engagement. We had a security team, a football ops team, out here last week.

‘We know our fans will get out and make a noise and we know they will behave themselves and represent the club well.’

Time will tell if he’s right. Yet the evidence of fans quietly soaking up the sunshine — not to mention the drink — provides early hope that the message is getting through. 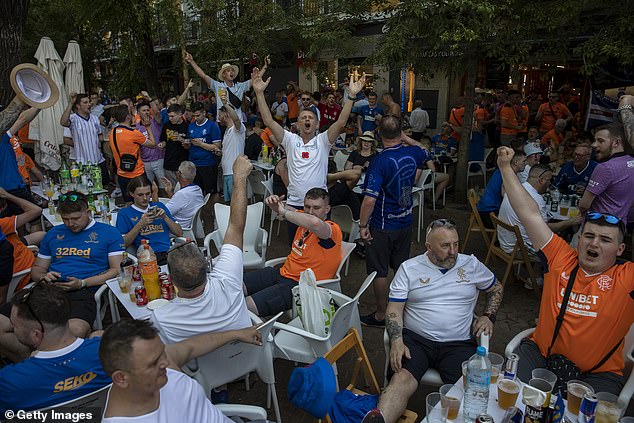 Much of the build-up has focused on Rangers fans, who have gone to Spain in huge numbers 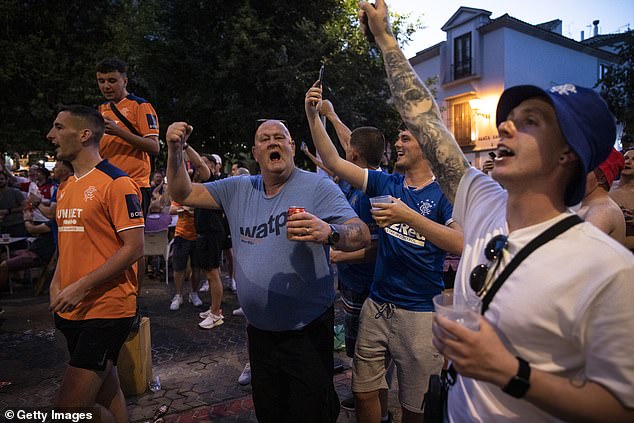 Around 100,000 fans –  many of whom are ticketless – have been urged to behave in Spain

Not all of them appreciate the tone. Accused of doing too little to prevent title celebrations spilling over last May, Rangers have been pro-active in their quest to avoid a repeat. Damned if they do, damned if they don’t, people can’t have it both ways.

Van Bronckhorst would rather just focus on the opportunity to make history on the pitch, but he faced a question on the matter.

‘I think it’s not about the numbers,’ he replied. ‘You can bring 50 people and they can bring chaos. I know we have a lot of people travelling with us and enjoying the final.

‘We have to enjoy this occasion. We as managers, players, staff and fans inside and outside the stadium, it’s not often you get to reach a European final.

‘It’s not just for Rangers, it’s also for Frankfurt and we have to enjoy it and make sure we are not causing any problems.’

In an ideal world, the manager wouldn’t be fretting over this stuff now. He can’t control the supporters and he can’t control the intense heat of Seville. What he can control is how Rangers deal with the occasion. On Wednesday night, the focus finally switches from fans to players.

‘Of course it’s different,’ said Van Bronckhorst. ‘We’re here now, we see the difference in the attention we have from the media, you look at the stadium and we also have the press conference. 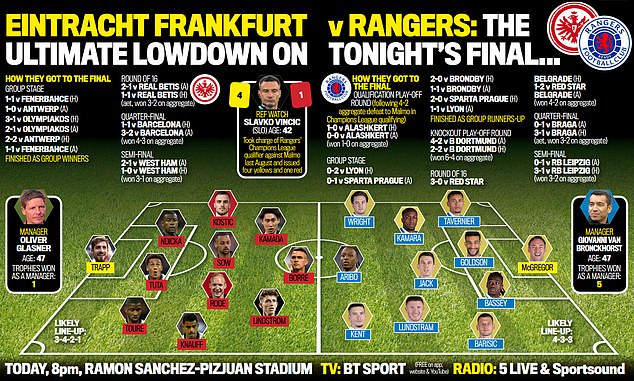 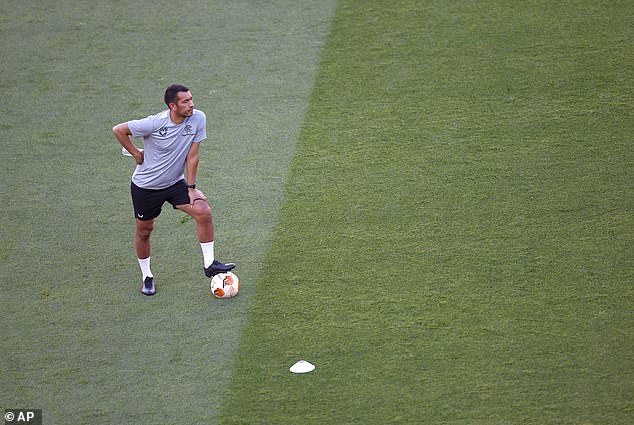 ‘It’s because we reached the final. But if you play in big games and finals you get so much attention. We have to make sure we are concentrating on our game.

‘We have done it so many times before and Wednesday will be the same. Of course, it’s a big game and it comes with pressure because you have the ability, the chance to win a major prize.

‘But, in any sport, you have to have a bit of pressure to perform well. That’s what we have to do.’

Coping with big games is an area in which he has some experience. As a player, Van Bronckhorst won league titles in Scotland, England and Spain. In 2006, he played the full 90 minutes for Barcelona when Henrik Larsson’s late cameo appearance turned around a Champions League final going Arsenal’s way.

He announced his retirement in 2010 after he captained the Netherlands in a World Cup final defeat to Spain.

As a manager, he won five trophies at Feyenoord — and landing the Europa League as his first Rangers prize — six months after he succeeded Steven Gerrard — would be remarkable. 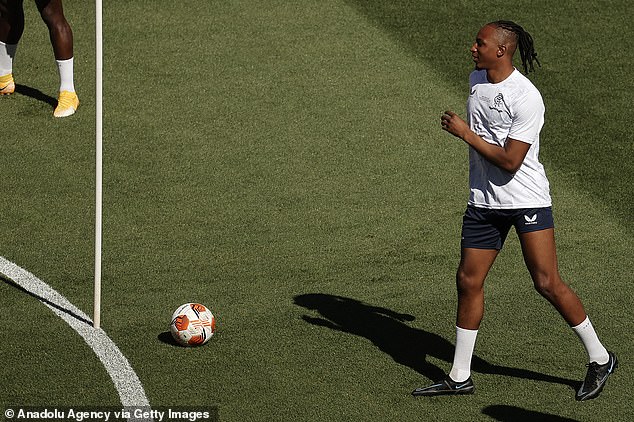 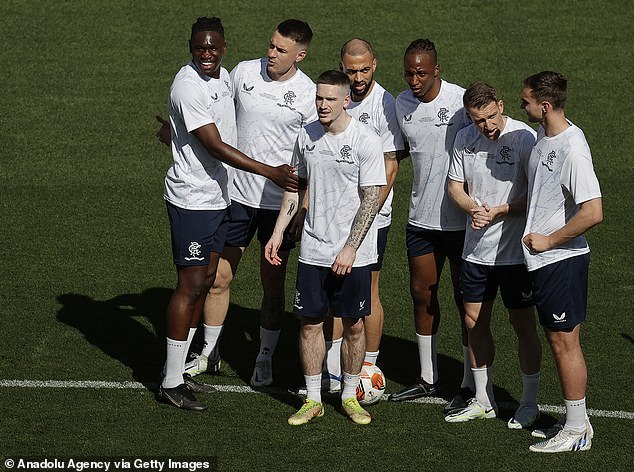 Since UEFA introduced the Europa League in season 2009-10, just eight out of the 24 finalists have come from a league outwith the big five and there’s a reason for that.

When Scottish clubs graced UEFA finals on nine previous occasions, finance was less of a factor than now. Given the disparity created by television revenue, no one expected a Scottish club to reach this stage again. Least of all a club which almost ceased to exist ten years ago.

With a support starved of these occasions for so long, the demand from Rangers fans for tickets has been enormous. And, with a capacity of 43,000, the Ramon Sanchez-Pizjuan Stadium was an odd choice for a European final.

Wednesday will see more ticketless Rangers fans watching the game on the big screens of Seville’s La Cartuja Stadium than those lucky enough to be at the game.

Supporters have been key to beating Borussia Dortmund, Red Star Belgrade, Braga and RB Leipzig and Rangers could really do with recreating the fire and intensity of their home performances in the heat of southern Spain.

‘Of course the final is different,’ said van Bronckhorst. ‘But, still, you will hear our fans a lot. Our performances can be good as well, so I think we will be ready, play the way we always do and make sure we give everything we have.’