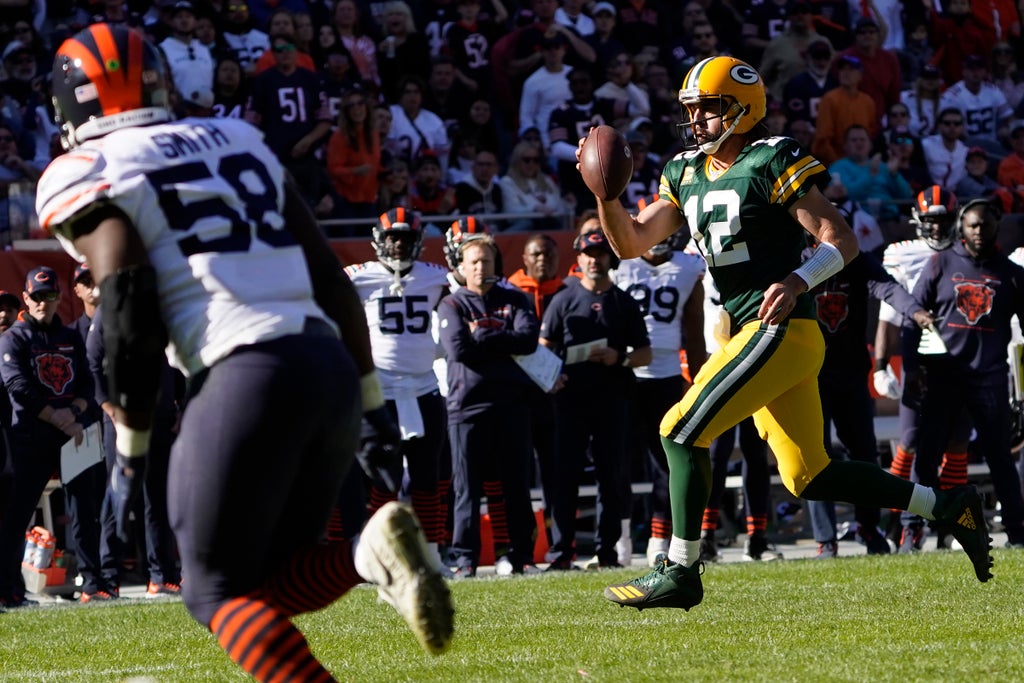 The Packers moved to 5-1 for the season and stretched their advantage over their opponents at the top of the NFC North with a 24-12 win, with Rodgers celebrating his running score by shouting “I still own you!” at the Bears fans.

The Bears are now level at 3-3 with the Minnesota Vikings, whose quarterback Kirk Cousins threw the winning touchdown to KJ Osborn in overtime as they got the better of the Carolina Panthers 34-28.

The Detroit Lions remain winless at the bottom of the NFC North following a 34-11 loss to the Cincinnati Bengals.

Patrick Mahomes threw two interceptions but responded with two touchdowns and over 400 all-purpose yards as the Kansas City Chiefs recovered from a half-time deficit to defeat Washington 31-13.

The Baltimore Ravens enhanced their Super Bowl contender credentials with a convincing 34-6 win over the previously impressive Los Angeles Chargers.

Latavius Murray, Devonta Freeman and Le’Veon Bell all ran in touchdowns for the dominant Ravens as Chargers quarterback Justin Herbert was limited to a single touchdown.

Baltimore top the AFC North with a 5-1 record but the Chargers slipped to 4-2 in the AFC West.

The Jacksonville Jaguars ended the second-longest losing streak in NFL history as Matthew Wright’s last-gasp field goal sealed a 23-20 victory against the Miami Dolphins in the all-Florida clash in London.