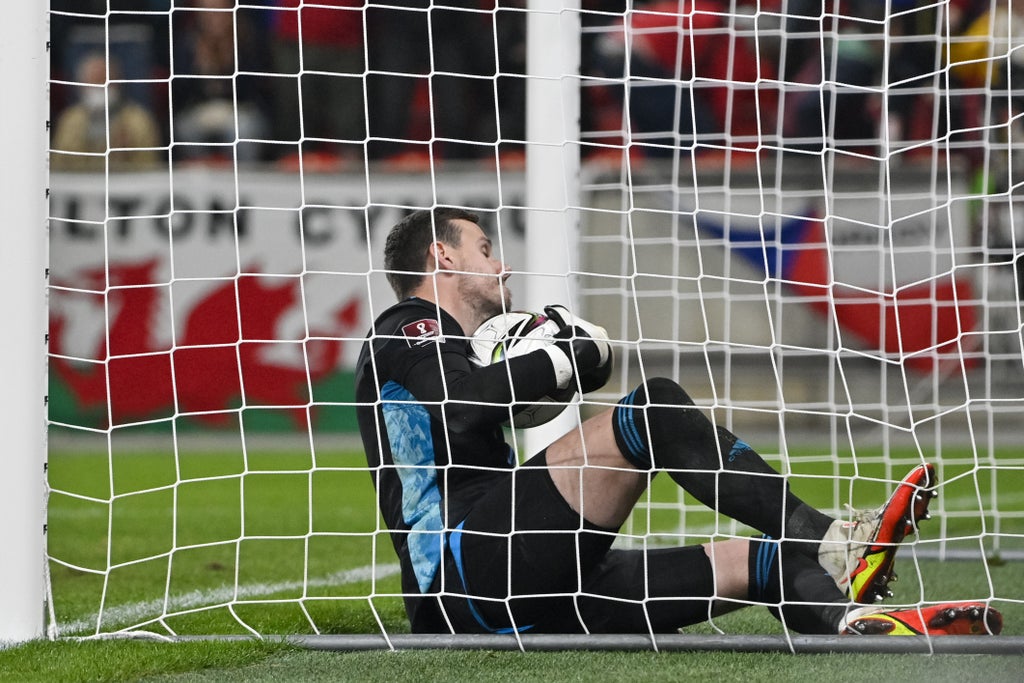 Aaron Ramsey absolved Danny Ward of blame for his World Cup howler in Wales’ 2-2 draw with the Czech Republic.

With the score 1-1 four minutes into the second half of a thrilling Prague qualifier, Ward miscontrolled a Ramsey back pass in front of his own goal.

The Leicester goalkeeper tried to remedy the situation but he touched the ball onto a post and it went in off him for a bizarre own goal.

“Danny has been absolutely terrific for us,” said Ramsey, who had opened the first-half scoring after 36 minutes before it was almost instantly wiped out by Czech Republic striker Jakub Pesek.

“He has made some really big saves throughout.

“These things happen from time to time but I am sure there is nothing to be worried about there.

“It is one of those things and we are glad he is in goal for us.”

Ramsey had played just 105 minutes for Juventus during a frustrating injury-hit campaign.

But the 30-year-old midfielder, who was wearing the Wales armband in Gareth Bale’s absence, played the full game and impressed throughout as Robert Page’s side created numerous chances at the Sinobo Stadium.

“The last 20 the legs were going a bit but we gave everything again,” Ramsey told Sky Sports.

“Full credit to the lads we dug in and got a result. We started off brilliantly and created a few opportunities.

“It was just an end-to-end game and I expect it was an entertaining game to watch.

“We played exactly the way we wanted to. We were brave on the ball, played compact and looked to create a few opportunities on the counter-attack.

“We could have taken a few more but full credit to the lads playing away in front of this hostile crowd.

“It was difficult but we showed what a resilient team we are.”

Boss Page expressed disappointment that Wales did not get the win that would have taken them into second place – the Czechs currently edging them out on goal difference.

Page said: “I thought the performance was excellent. We’re disappointed we didn’t get the win but we thoroughly controlled the game.

“We created some good chances and couldn’t have thrown any more at it.”

Ward, who displaced Wayne Hennessey as Wales number one before Euro 2020 in the summer, was saluted by Dragons’ fans at the final whistle.

“Danny will be disappointed with it (own goal) and rightly so,” Page said.

“But he’ll bounce back and I thought that was a really nice touch by the supporters at the end for them to do what they did.

“The lads will rally around him and, knowing him as a character, it won’t be an issue for him.”